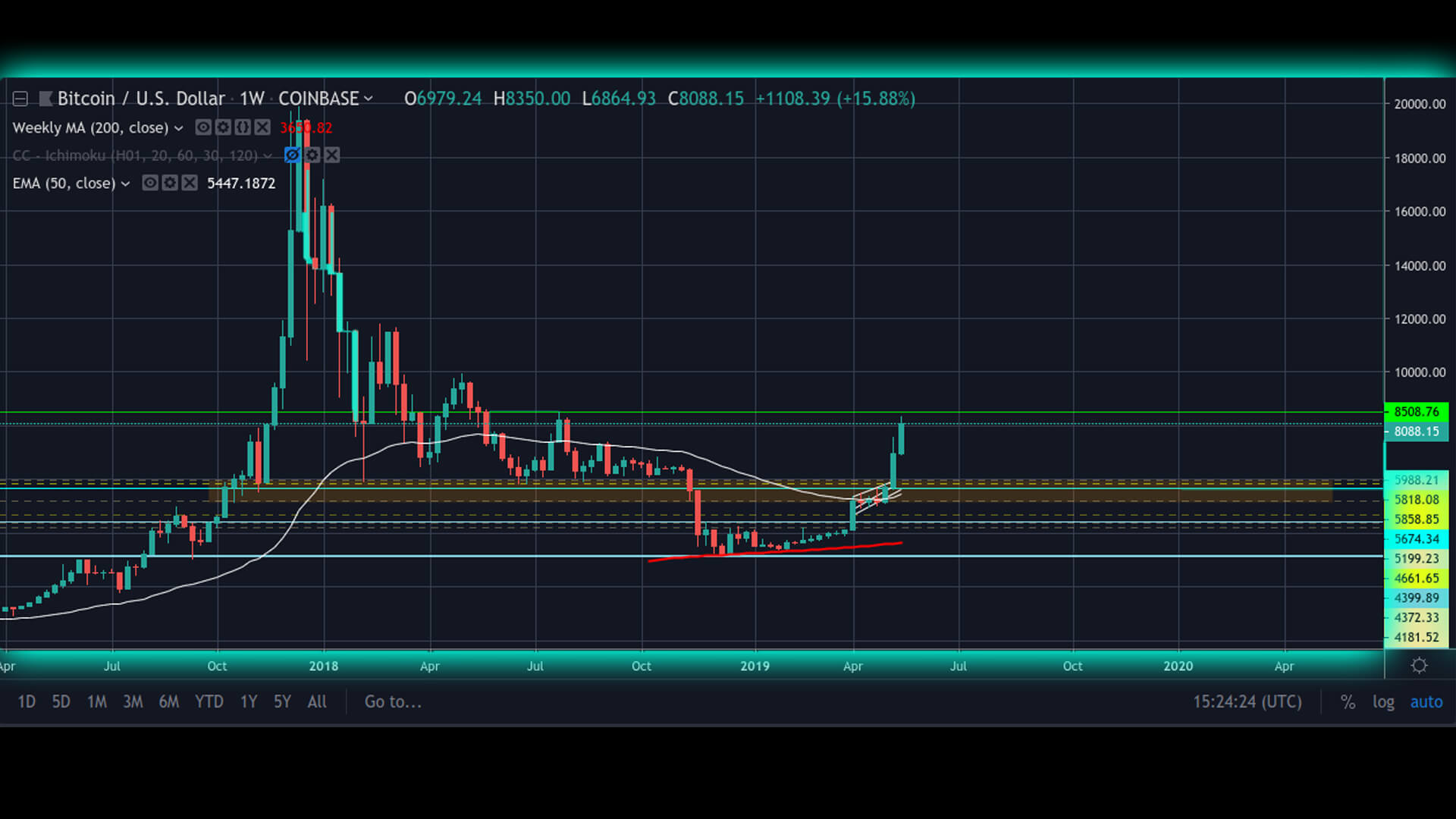 Bitcoin, the worlds largest cryptocurrency by market cap and hash rate, continued higher overnight as its parabolic run shows it still has some steam.

Looking at Bitcoin's weekly chart we can see that price is now testing the $8,500 level which acted as resistance during one of the last dead cat bounces of the 2018 bear market.

Potentially spurring some of the positive price action, an abundance of good news has hit the cryptocurrency space recently. The long awaited Bakkt crypto futures exchange announced on Monday that they would be testing their futures product this summer.

Bitcoin and other cryptocurrencies are also making their way into large retailers such as Wholefoods, Homedepot and Starbucks to be used as a medium of exchange thanks to the a product just launched by Felxa.

There has also been some negative news that price has taken little consideration of.

California congressman Brad Sherman called for an outright ban of cryptocurrency purchases by U.S. citizens earlier in the month. This had little to no effect on bitcoins price action as it is up 30% since the congressman had gone public with the ban proposal.

The hacking of 7000BTC from Binance a week ago also failed to prevent bitcoin from shooting higher.

Infamous bitcoin bull and headline grabber Tom Lee is at it again with an interesting prediction.

The Fundstrat Co-Founder said over the weekend that the naysayers who thought BTC still had lower price targets to hit would catch FOMO when the price of a single bitcoin reached $10,000.

Accompanying his thoughts was a poll which reflected his opinion.

At what price will see FOMO from those who gloated about 90% crash in $BTC?

My SWAG is $10,000 is price that causes FOMO from those who saw #bitcoin as dead forever.

POLL:
At what price do we see FOMO?

The Dow Jones Industrial Average has rallied over 300 points as intraday trading takes hold on Tuesday.

As pointed out by Zero Hedge, it appears the jump on the DOW and the majority of major indexes came on the back of confident words from U.S. president Donald Trump who said he believed discussions with China over trade “will be very successful.”

The rebound started just after 8pm EDT on Monday night, with the S&P trading just above 2,800 when President Trump said he believed discussions with China “will be very successful,” with the outcome expected in three or four weeks.

Of course, it is quite possible that the market's overly optimistic interpretation of Trump's take may have been premature, considering that on Tuesday morning Trump has had a barrage of no less than 7 tweets on the topic of trade war, with the highlight so far his claim that "when the time is right we will make a deal with China. My respect and friendship with President Xi is unlimited but, as I have told him many times before, this must be a great deal for the United States or it just doesn’t make any sense." In second tweet, Trump says deal must make up some of “tremendous ground we have lost to China on Trade since the ridiculous one sided formation of the WTO. It will all happen, and much faster than people think!"

Major US stock indexes have been sensitive to the ongoing deal the Trump Administration is trying to strike with China.

“The trade war is driving markets at the moment,” said Rory McPherson, head of investment strategy at Psigma Investment Management in London. “Markets were prone to a selloff after a good start to the year on expectations of policy easing from central banks and no escalation of trade tensions, and it’s this latter pillar that has come away.”

China has dished out some harsh words towards the Trump Administration over the past 24 hours. One editorial published by the Xinhua News Agency and the People's Daily claimed that America was fighting for "greed and arrogance."

"The trade war in the United States is the creation of one person and his administration who have swept along the entire population of the country," the editorial read. “Whereas the entire country and all the people of China are being threatened. For us, this is a real 'people's war'.”

The harsh words may suggest that the talks between the two nations have caused more turmoil than Trump and his advisers would like to admit. In fact, the recent increase in tariffs issued by the U.S. also suggests the same.

Meanwhile, Trump suggested on Tuesday that enlisting the Federal Reserve to debase the dollar "would be game over" for the U.S. China "trade war."

“China will be pumping money into their system and probably reducing interest rates, as always, in order to make up for the business they are, and will be, losing,” he said in a tweet. “If the Federal Reserve ever did a ‘match,’ it would be game over, we win! In any event, China wants a deal!”

Justin Wise
As many of you know, tomorrow the United States House of Representatives is voting on...
Read More

vamtam-theme-circle-post
Joseph Jankowski
A recent survey shows that despite the fall from its all times high and the...
Read More

Vorhees: Governments Will Oppose Crypto With a VengeanceCraig Wright Is Legally Satoshi! What is the Future of Bitcoin